Kim tagged me so here goes...

Rules
Each person tagged gives 7 random facts about themselves. Those tagged need to write in their blogs the 7 facts, as well as the rules of the game. You need to tag seven others and list their names on your blog. You have to leave those you plan on tagging a note in their comments so they know that they have been tagged and to read your blog.

1 - I've watched "Casablanca" at least 20 times (sometimes I mouth the words at the same time as Boggie).
2 - I studied Latin for 7 years.
3 - I've read all of Agatha Christie's novels and short stories
4 - DH and I are the same height
5 - I stalk dogs (mostly Shih-Tzus and Yorkies) but don't have one (yet).
6 - No one calls me by my real name (except my parents and their relatives)
7 - I love creme fraiche ice-cream

Does it work if I tag someone who already answered these questions? Let's say yes, shall we? So I'm tagging Rosebyany, Arleta, Lanea, Rho
(I think all four already answered), Mangokiwi, Jane and Sheri.
4 comments: 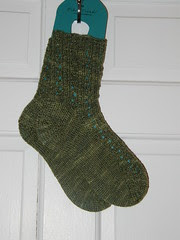 Seduction socks
Originally uploaded by miminh3.
Is it me or do these socks look just like the Nautilus socks from last year? I guess I like green!

My May socks are Quill lace socks using Lorna's Laces shepherd sock in mint stripe (an exclusive color for Purl). Well, at least there will be some white in it...
4 comments: 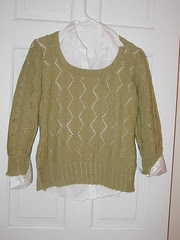 I wish upon a knitting star

The knitting gods are smiling down on me.

Evidence #1: Yesterday I learnt that Kim had drawn my name in her birthday give-away and guess what? I won a skein of STR in "Smokey Topaz"!! (the *exact* colorway that I've been looking for ever since Blue Moon announced that they wouldn't take customer orders for now). Kim, thank you very much for this contest and Happy Birthday!

Evidence #2: This year's Knitter's Review retreat will take place in Lenox, MA (two hours from Boston) on the *very first* fall weekend that I won't have to spend studying. How serendipitous!

I finished three projects during April (pictures to be posted later). Full disclosure: I am not a fast knitter... two of those projects have been sitting in my knitting basket since last summer!

The seams are done, the buttons are sewn in, and all ends are woven in on both Kim Hargreaves' Fay sweater and Kim Hargreaves' Buttercup shrug. My conclusions are:
- Two thumbs up for Rowan 4-ply soft, not so much for Rowan 4-ply cotton.
- Small gauge is good for me, both as the knitter and as the recipient of the knitted item
- As long as I remember to have selvedge stitches, seaming is not bad at all
- I hate the picot cast-on and picot bind-off.

My April socks were Ann Budd's Seduction socks knit in Blue Moon Fiber Arts "Seduction" yarn. This is a 50% merino/50% tencel blend - the tencel gave a nice sheen similar to that of silk (wonderful on the hands) and the rib pattern was great to counter the lack of elasticity. However 400 yards/4 oz of BMFA Seduction costs $34 (ouch!). I was lucky enough to grab one skein marked 30% off when I visited Seattle's LYS Tricoter but if you're looking for a substitute, I recommend Yarn Botanika's merino/tencel which comes in both fingering and DK weights. That's what my next project (Tuscany shawl) will be made out of...
1 comment:
Newer Posts Older Posts Home
Subscribe to: Posts (Atom)